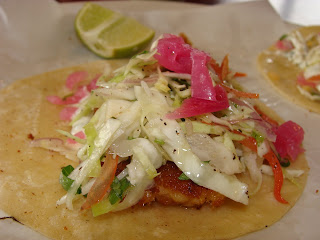 In 2006, the International Gymnastics Federation revamped the scoring system for gymnastics from the “perfect 10” model to the current two part model. Gymnasts' total scores are now assessed in two parts - the difficulty of the routine and its execution. If this system applied to restaurant experiences, Fuego’s somehow managed to stick the landing, but that wasn’t enough to compensate for all the bobbles, falters and face plants during the execution.

First, there was the issue of location. I was prepared to find Fuego’s in a banal strip center on North Lamar, but I wasn’t prepared for the fact that it was impossible to turn left from the northbound lane. The shopping center was located off of a two-way side street, yet, inexplicably, the traffic sign said “No Left Turn.” So, we went about half a mile north on Lamar, turned around and entered the shopping center from the southbound lane. Not a big deal, but annoying nonetheless.

I was also prepared for the lack of ambiance. Some of my favorite restaurants look like Roseanne’s living room. But walking into Fuego’s we were hit with a miasmic cloud of ammonia. Having lived down-wind from a meat packing plant for 20 years, my sensitivity to smell is less than delicate, but this was palpable. A quick trip to the restroom offered an explanation. In addition to the industrial strength toilet cake, there were 3 other cleaning products and two signs with hand washing instructions and H1N1 warnings. This didn’t help my appetite, but I was reassured that I was at minimal risk for contamination.

We ordered soft drinks, but after one sip, we knew something was amiss. The ice tasted like it had absorbed the ammonia from the toilet cake/cleaning supply arsenal, along with a variety of medicinal infusions. It was at this point that we realized that it would take something spectacular, the food equivalent of a perfectly executed Geinger, to keep Fuego’s from being disqualified.

The weird smells and caustic ice distracted my attention away from the fact that we weren’t offered the standard chips and salsa appetizer. That’s unfortunate, considering how powerful a good basket of salty chips and a bowl of salsa can be to a dining experience. How else do you explain the success of Chilis?

We ordered the Fish Taco Plate and the Carne Asada Taco Plate with a side of rice and beans. Both taco dishes were made with fresh homemade corn tortillas. The fish tacos were prepared with lightly breaded fresh snapper, not the typical cheap cod fish. The fish was topped with a habanero coleslaw and pickled onions, finished off with a jalapeno tartar sauce. The carne asada tacos were pretty basic with meat, cilantro and onions accompanied by a choice of red or green salsa. The rice and beans were good, but a little cold.

Back to the gymnastics analogy. When it comes to restaurants, Austin is like the Olympics. With so many restaurants to choose from, only the elite can survive. If you’re a little hole in the wall, in a bad location, you’re wagering your entire success on the taste of your food instead of trying to create an overall pleasant experience for your customers. Shawn Johnson didn’t win a silver medal just by nailing her dismounts. She won by meeting all the requirements for difficulty, artistry and execution in her routines. It’s the build-up before the landing that keeps us on the edge of our seats, rooting for a gymnast to stick the landing. I wasn’t rooting for Fuegos. The tacos were good, but by the time they arrived, I was ready to Yurchenko on out of there. 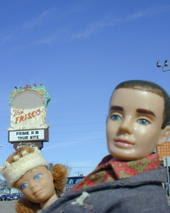